Top Stories from Independent Journalists Across the Web
U.S. border has collapsed completely as Biden regime now busing COVID-infected migrants all across U.S.
By jdheyes // 2021-08-16
Mastodon 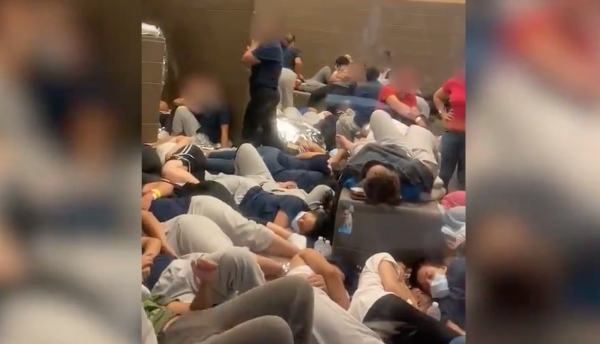 It should be completely obvious by now that whoever is running the Biden regime is out to destroy what is left of our American experiment in self-government, based on reports this week about the worsening situation along the U.S.-Mexico border. For months now after Biden reversed nearly all of President Donald Trump's border enforcement policies, hundreds of thousands of migrants from poor Central America have traipsed north towards the U.S., and of course, with Mexico's explicit permission. Most of these people are simply being allowed in, the Border Patrol and the Customs and Border Enforcement agency becoming little more than U.S. welcoming committees whose personnel are now babysitters and migrant shufflers. But in recent weeks, a new, worsening situation has developed: The Delta variant of COVID-19 is reportedly spreading throughout the hemisphere, and now more than 40 percent of migrants crossing illegally into our country are infected. The Washington Examiner reports that the situation has gotten so bad that one city in Texas -- Laredo -- has now started refusing to take in new illegal aliens because of the massively high rates of COVID infection. The outlet reports: “That was very high,” Laredo Mayor Pete Saenz said in an interview, referring to the infection rate among migrants dropped off by the Border Patrol last week. Laredo health authority, Dr. Victor Trevino, confirmed the numbers. The 40% infection rate is the highest known positivity rate along the U.S.-Mexico border. Last week, McAllen, Texas, reported a 15% positivity rate among migrants released from custody. "Concerned that migrants arriving in Laredo would further strain hospital resources, Laredo officials contracted private bus companies to transport migrants arriving from the Rio Grande Valley to larger cities across the state," the outlet continued. "By not admitting migrants on the McAllen buses, the city is not required to test them for the coronavirus and could forward the families elsewhere. Those who test positive cannot travel and must be quarantined for 10 days, a situation Saenz wanted to evade to avoid migrant overflow," the report added. But this isn't the half of it; even Biden's handpicked left-wing Department of Homeland Security secretary, Alejandro Mayorkas, understands what is at stake -- the sanctity of our country. In a Friday visit to the border, Mayorkas was recorded by a Border Patrol source that leaked the audio file to Fox News in which he expresses frank, eye-opening sentiments regarding the current state of rank lawlessness along portions of the U.S.-Mexico border. "A couple of days ago I was down in Mexico, and I said look, you know, if, if our borders are the first line of defense, we're going to lose and this is unsustainable," Mayorkas said Thursday while talking to agents, according to audio obtained by Fox News' Bill Melugin via a Border Patrol source. "We can't continue like this, our people in the field can't continue and our system isn't built for it." Continuing, the DHS chief said that the current chaos along the border "cannot continue," adding that the government's immigration infrastructure was never built to handle so many hundreds of thousands of migrants like those seen in recent months. He also said he is "very well" aware that the sector he visited this week came extremely close to "breaking." "It’s our responsibility to make sure that that never happens again," he told agents. In a tweet, Townhall correspondent Julio Rojas quoted another immigration official who said, "This has surpassed the point of sustainability — this is lunacy," in a tweet with video showing overcrowded conditions at a detention site. https://twitter.com/Julio_Rosas11/status/1425499114578534410 And finally, legal watchdog group Judicial Watch reports that the regime is using small regional airports in central Texas to disperse "large groups of illegal immigrants throughout the U.S. after releasing them from detention facilities in other parts of the state, city and federal sources confirm." This is beyond out of control, this is the future of our country we're talking about here. It's time for state governors to say "no more" and be prepared to implement steps to enforce it. Sources include: JudicialWatch.org WashingtonExaminer.com FoxNews.com OpenBorders.news
Mastodon
Parler
Gab
Copy
Tagged Under:
Texas illegal immigration invasion Open Borders Illegal aliens DHS pandemic illegals chaos infections lunacy covid-19 covid spread
You Might Also Like