Top Stories from Independent Journalists Across the Web
Is this even America? Clark County, Nev., declares truthful reporting about COVID to be a "public health crisis" by labeling it "disinformation"
By jdheyes // 2021-09-27
Mastodon 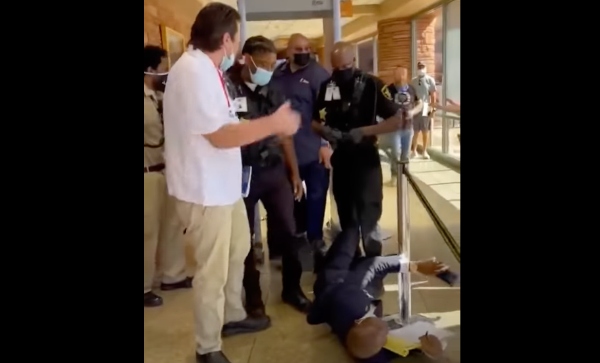 Western governments around the world are continuing to exploit the COVID-19 pandemic to enhance their power and deprive their citizens of hard-won, hard-fought rights that are supposed to be guaranteed and protected, and that includes the United States, where many Democrat-controlled jurisdictions have simply begun to ignore the Constitution altogether because they've been getting away with it. But we've gone past the simple imposition of mandates and rules that test the limits of legal behavior; now we've moved into the criminally absurd, and trust us when we tell you, it's only going to get worse from here. The Democrat authoritarians who run Clark County, Nev., have actually issued a rule along with the elected board overseeing the Las Vegas Strip "declaring COVID-19 misinformation a public health crisis" that is allegedly "creating 'a culture of mistrust' and prolonging the coronavirus pandemic," the Reno Gazette-Journal reported this week. And of course, the authoritarians get to decide what "disinformation" looks like. The paper added:

A divided vote by the seven-member Clark County Commission came during a contentious Tuesday meeting that saw the forceful removal by security officers of a man running for state lieutenant governor; complaints that free speech rights were being limited; and a reference by a speaker at the podium to "bloodshed on the streets of Las Vegas," the Las Vegas Sun reported.

Bystander video circulated online showed Mack Miller being pushed backward by two officers through a metal detector and falling to the floor of the Clark County Government Center. Miller, a frequent candidate for public offices and regular speaker at meetings, was not arrested. A county statement said Wednesday the matter was under review.

https://youtu.be/BJB1oAm-JTk https://youtu.be/38nNAStXf-U For the record, Miller is a candidate for Nevada lieutenant governor. "Unlike a measure approved Sept. 1 by the San Diego County Board of Supervisors, the Clark County vote was advisory and did not include recommendations to combat misinformation," the Reno paper stated, but of course, we all know that is just a formality. It likely won't be long until the Clark County board of supervisors follow the lead of national Democrats and the left-wing big tech giants and ban any information about COVID that doesn't toe the party line (such as, 'COVID-19 vaccines are good all the time for everyone and they are 100 percent safe!' -- which is BS, of course). Some commissioners are already flirting with the totalitarianism. For instance, Justin Jones, sponsor of the Clark County measure, said it's important to "commit to doing all we can to combat the falsehoods that continue to jeopardize the lives of our citizens."

There you go. The freedom to choose is now a threat to 'democracy,' at least in Clark County, Nev.

The two who voted against the measure actually got it right in terms of constitutionality. Commission Chairwoman Marilyn Kirkpatrick and Commissioner Jim Gibson correctly observed that the measure is only going to further divide Las Vegans and will be seen as curbing what Gibson described as "the right to speak, to dissent, to express opinion, to get into even a real significant public discourse or an argument."

"When we have to tell them that those rights are not impaired by something we're doing … we've almost already lost the battle," Gibson said. We don't live in a free country anymore, and neither does anyone else who currently resides in any Western "democracy." Just ask Australians. Sources include: Brighteon.com RGJ.com
Mastodon
Parler
Gab
Copy
Tagged Under:
free speech First Amendment Nevada censorship authoritarianism thought police pandemic insanity Medical Tyranny disinformation censored speech police Clark County obey oppressed left cult medical fascism liberty covid-19 COVID exploitation Mack Miller
You Might Also Like