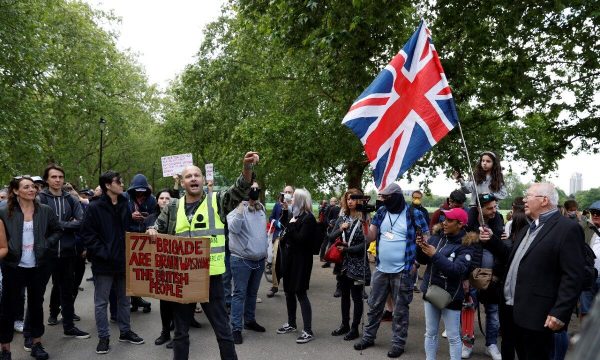 On Saturday, Aug. 28, thousands of protesters took to the streets of London, demanding that the U.K. government halt the vaccine passport program that it has been trialing. The protest march was organized by the Save Our Rights UK group as a "medical freedom march" that would be "standing against mandated vaccines and vaccine passports." Protesters initially gathered in Hyde Park before marching throughout central London, crossing the River Thames and eventually ending at Clapham Common. Along the way, the demonstrators carried placards saying "Big Pharma Loves You," “Vaccines, a Choice Not a Passport," "Media is the Virus" and "Hands Off Our Kids." Near the end of the protest, some of the demonstrators were arrested by London's Metropolitan police.

The heavy-handed police response to the protest has drawn criticism, especially when compared to the response to the march held by the environmental group Extinction Rebellion at the same time. Four arrests were made during the Save Our Rights UK protest. In contrast, none were made at the Extinction Rebellion protest. "Extinction Rebellion can do what they want, block off Central London, they can sit there for hours and nothing but a couple of people come to Clapham Common and … this is what happens," said one witness to the police action. Meanwhile, others were disappointed at mainstream media's uneven coverage of both protests, with the Extinction Rebellion protest getting more attention. "A few Extremist Rebellion anarchists perform to a cabbage and it’s all over the news," wrote political commentator Calvin Robinson on Twitter. "Thousands of people protest against medical tyranny and not a peep." "Mainstream media is complicit," he added. Meanwhile, author and journalist James Dellingpole pointed out how most British mainstream media treated the protest as if it never happened. "But [it] didn't happen, according to the BBC and the rest of the [mainstream media]," he tweeted.

Last Saturday's march was just the latest in a series of protest actions that have occurred in the U.K. against the vaccine passports that the government has been mulling. Less than a week before, on August 23, anti-vaccine protesters occupied the headquarters of ITV News and Channel 4 News in London. The protesters marched from King's Cross station to ITV News's Gray's Inn Road headquarters where they were let in through an emergency exit by a supporter who was already inside the building. The protesters then found themselves face to face with ITV News' staff and journalists in the building's reception, separated only by a glass wall. The U.K. has been trialing vaccine passports since April, when the first trials were implemented as a supposed way to restart public events such as concerts and sporting events. Back then, government leaders promised that the passports would be time-limited. In addition, people could also use evidence of a negative test in place of a vaccine passport. (Related: New update to UK NHS tracking app turns it into a VACCINE PASSPORT.) But now, the government is looking toward the full introduction of domestic vaccine passports. In July, Prime Minister Boris Johnson announced that vaccine passports would become compulsory to enter packed venues, such as nightclubs, from late September, once all adults have had a chance to receive two vaccinations. The move received considerable backlash from Conservative politicians. "Vaccination is sensible. But it is entirely wrong to try to coerce people into having them," stated former Brexit Secretary David Davis. Others warned that vaccine passports effectively mean making vaccines compulsory. "I have to say I don’t welcome the minister’s statement, particularly vaccine passports for crowded venues, which is effectively moving to compulsory vaccination," said MP Mark Harper, who also leads the lockdown-skeptic Covid Research Group. Harper added that the government could struggle to win support for the measures among other Conservatives in government. Business leaders also reacted negatively to the passport. "What an absolute shambles," stated Night Time Industries Association chief executive Micheal Kill. "The government’s own report into vaccine passports found they were more trouble than they’re worth – so what could possibly explain the about-turn, just as millions across the UK experience their first taste of a night out in a year and a half?" Follow MedicalTyranny.com for more news on vaccine passports around the world. Sources include: Breitbart.com Standard.co.uk Twitter.com 1 Twitter.com 2 TheGuardian.com 1 BBC.com 1 BBC.com 2 TheGuardian.com 2 TheGuardian.com 3
Mastodon
Parler
Gab
Copy
Tagged Under:
protest UK big government pandemic london health freedom Medical Tyranny resist badhealth badmedicine coronavirus vaccine wars covid-19 vaccine passport
You Might Also Like