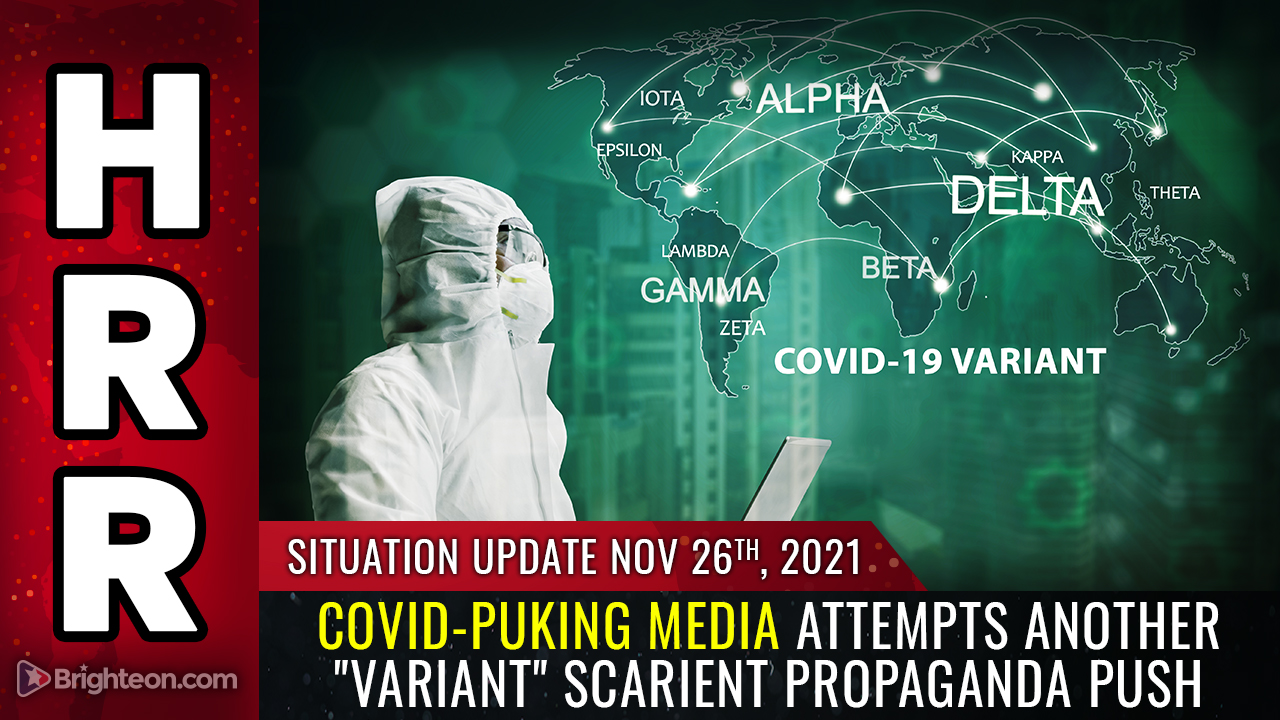 As you've noticed over the last two days, the global corporate media psyop spell weavers have puked up another "scariant" called "Nu," and they are now hyperventilating over it, claiming it has over "30 horrifying mutations" and might spread faster than anything in history. The underlying message, of course, is that everybody should stop resisting and immediately obey the demands of (corrupt) government. The thing spreading the fastest, of course, is the media hysteria. A passenger plane that departed from South Africa and landed in Amsterdam was prevented from de-boarding, stranding South African passengers on the plane, all due to mass media hysteria over the new covid "scarient."

Part of the message being delivered in this mass media scariant panic is that all the vaccines and boosters that people already took are apparently worthless against this new variant. This means that everybody's vaccine compliance "vaccine passport" status essentially resets to zero. The Associated Press is reporting that Israelis are already losing their minds over this new covid scariant and that Prime Minister Naftali Bennett is on the verge of declaring an "emergency situation." According to the AP, the new variant is being detected in fully vaccinated individuals traveling to Israel. Bennett is already stoking the flames, warning that travel and borders will be locked down while the Israeli military hunts down people who recently traveling from those countries and throws them into covid quarantine camps: The government later said that all countries in sub-Saharan Africa would be considered “red countries” from which foreign nationals are barred from traveling to Israel. Israelis are prohibited from visiting those countries and those returning from them must undergo a period of isolation. The Israeli military will work to locate all individuals who have been to red countries within the past week and instruct them to go into isolation while testing is carried out, it said. With the Australian military now hunting down and forcibly vaccinating indigenous people (Aborigines), the world's terrorist governments are ramping up their final assault on humanity, and this coordinated "Nu variant" media hysteria campaign is designed to drive to much fear into the minds of world citizens that they will go along with full-blown tyranny and genocide.

Will you comply if the media terrorizes you enough?

As I explain in today's short Situation Update podcast, this is all a campaign to try to achieve global compliance with government tyranny. The media are all acting as journo-terrorists, pushing mass hysteria to drive people into compliance (and more vaccines). Big Pharma is drooling over the potential new profits from a whole new wave of vaccines, which will of course set off more mutations and lead to yet more variants in 2022 and beyond. The entire thing is a rigged criminal scam rooted in fraud and evil. This will never end by complying with it. The people of the world must peacefully rise up and stand strong against the fear campaigns, the bioterrorism and government-run genocide. The reason this "scariant" was just released in a coordinated media fear campaign, of course, is because humanity is waking up and learning to resist covid tyranny. So the globalists are doubling down on their attacks against humanity, defrosting more bioweapons from Fauci's freezer collection while pounding the psyche of the population with relentless media fear campaigns. The good news in all this? If you have natural immunity against covid, you're naturally immune to all the variants, too. But the oblivious masses who already took the early covid jabs have destroyed much of their immune function, meaning they are now extremely vulnerable to any new real variant that might emerge, assuming they really exist at all. Notice, too, how convenient the timing is with all this, where the media now has an excuse for why so many vaccinated people are dying and have compromised immune systems. It's the variant's fault! Bottom line? If you comply, you die. Do not comply. Full details in today's podcast here: Brighteon.com/f13adc33-72bf-47ca-99bd-f3f85523592f Find new podcasts and interviews each day at: https://www.brighteon.com/channels/hrreport
Mastodon
Parler
Gab
Copy
Tagged Under:
vaccines panic pandemic infections hysteria vaccine wars covid-19 COVID variant
You Might Also Like