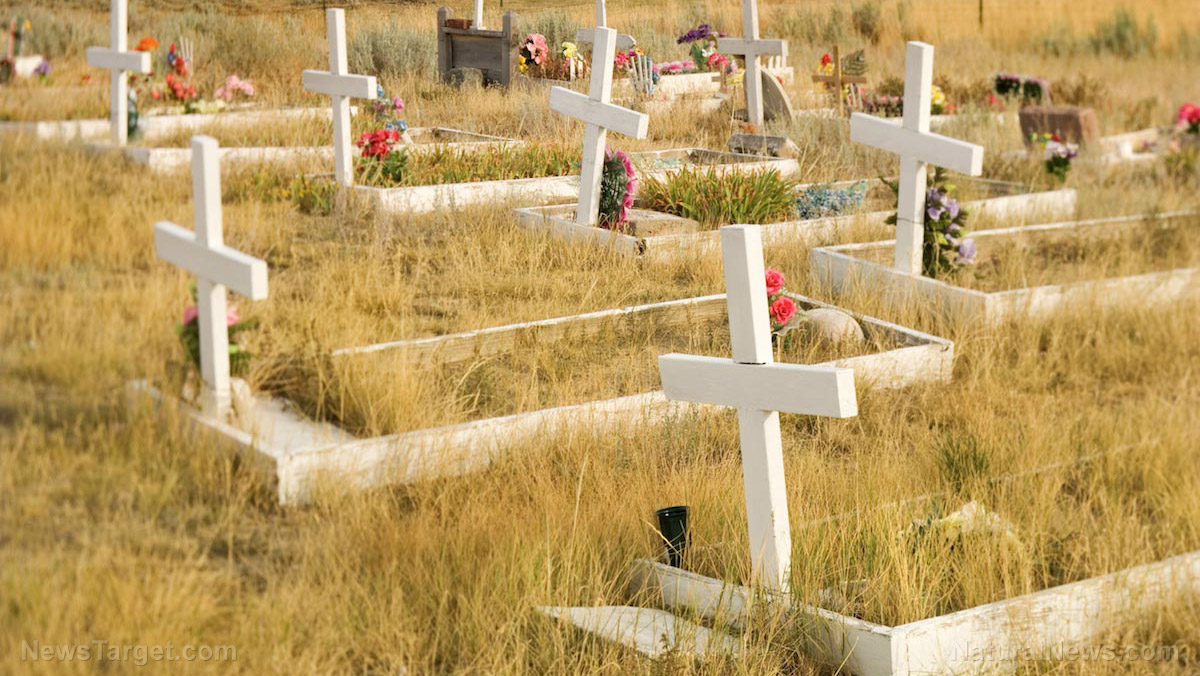 More than five cemeteries overseen by The Catholic Cemeteries have seen a 15 percent increase in burials and a 10 percent increase in cremations so far this year compared to 2020. Executive Director Joan Gecik says that she believes the increases are due to a backlog of committal services that were postponed at the height of the "pandemic," but the reality is that "vaccines" more than likely also play a role. Those who still believe in the plandemic are already fearfully making reservations for burials and cremations of their loved ones for the summer 2022, expecting that the next "waves" will wipe out family members. Calvary in St. Paul, Gethsemane in New Hope, Resurrection in Mendota Heights, and St. Anthony's and St. Mary's, both in Minneapolis, are among The Catholic Cemeteries facilities where changing trends are being observed in correlation with the jab rollout. "We have a high concern for safety for anyone coming to our cemeteries, including our employees," Gecik said, noting that said facilities are asking people to wear face coverings outside and distance from their loved ones at all times. "It is still going on," Gecik added about the plandemic, making no mention about the potential role that Chinese Virus injections might be playing in this sudden uptick in body disposal requests.

Why are so many Catholics rejecting God and putting their faith in Covidism?

It is disappointing, to say the least, that a religious organization like this would have so little faith in God as to forsake the gathering of family members and loved ones due to fear about some invisible virus. Even worse is the patent rejection of any consideration that the jabs might be causing more people to die, resulting in the need for more burials and cremations. How is this not even a thought in people's minds? The political correctness on display at The Catholic Cemeteries, which have reportedly gone through "various levels of safety protocols," the group says, is truly disheartening in light of all that has been revealed over the past several years. The organization says that rather than going with the Bible, it has chosen to instead follow the recommendations of the corrupt Centers for Disease Control and Prevention (CDC), a private corporation with a vested financial interest in vaccines that pretends to represent and support public health. The Catholic Cemeteries is not even meeting in person anymore with grieving family members who lose a loved one, Gecik admitted. Instead, they are offering counseling digitally over Zoom or "other means," she said. "It's kind of like being super sensitive to everything that is going on all the time," Gecik added. "And that is how it was daily during (the height of) covid." In 2020, the five sites aforementioned saw 1,035 burials and a 44 percent cremation rate. In 2021 so far, there have been 1,187 burials and a 54 percent cremation rate. "I tend to find that the vax has led to MORE fear and panic than before and everyone is only living for their boosters," wrote one commenter at Natural News, sharing personal observations. "I would rather die of a gunshot wound than allow myself to submit to what they, led by Fauci, represent. Doesn't Xi (Jinping) see that the whole country is being USED by Fauci and no-one will get better until Fauci is arrested?" Another commenter wrote the following simple phrase to illustrate what is happening to people's bodies, and more specifically their cardiovascular systems, with these injections: "Get clotted, go carotid!" More related news about the Chinese Virus and the injections they are erroneously calling "vaccines" can be found at Pandemic.news. Sources for this article include: TheCatholicSpirit.com NaturalNews.com NaturalNews.com
Mastodon
Parler
Gab
Copy
Tagged Under:
genocide vaccination deaths Vaccine injuries Vaccine deaths depopulation faith cremation burial badhealth COVID Plandemic covidism The Catholic Cemeteries
You Might Also Like