Top Stories from Independent Journalists Across the Web
Situation Update, Mar 31st: Those taking vaccines are shockingly ignorant of the criminal fraud behind Big Pharma
By healthranger // 2021-03-31
Mastodon 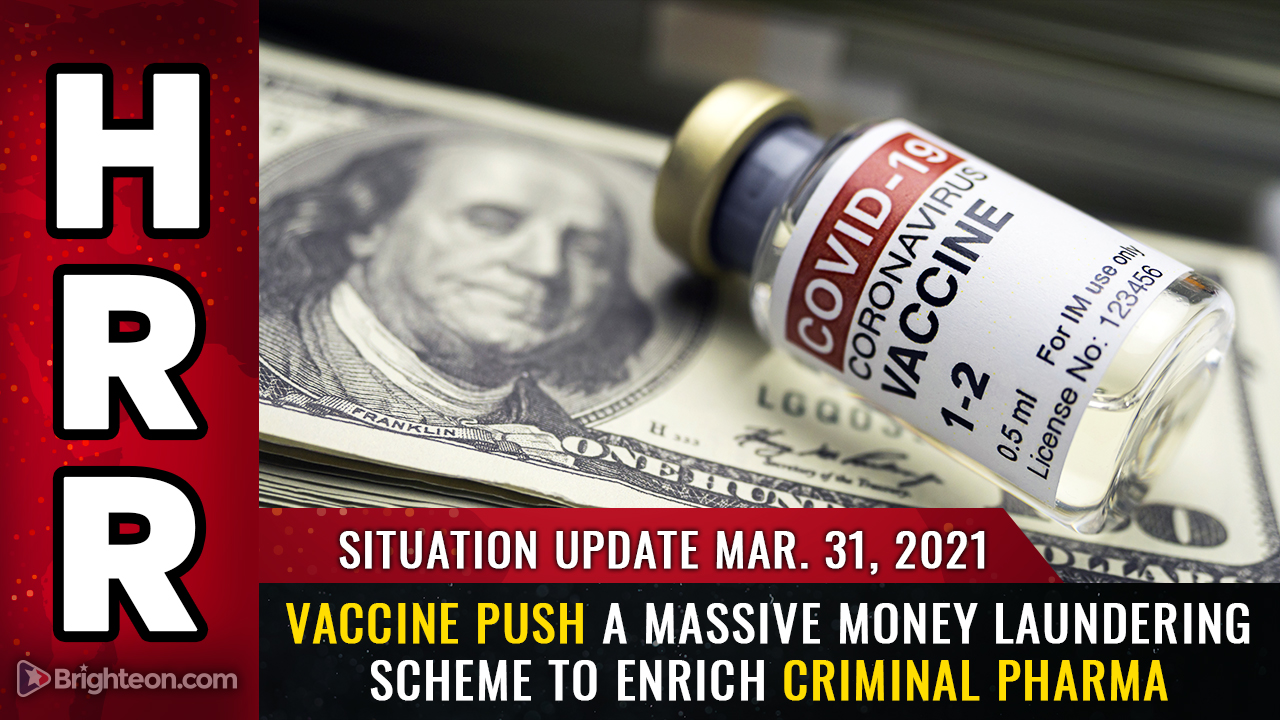 Many people don't seem to realize it, but nearly every vaccine manufacturer currently profiteering from covid-19 vaccines has a long history of criminal fraud, bribery, kickbacks and faked science. This fact has even been covered by the corporate news media over the years. For example, ABC News reported in 2010 that AstraZeneca, "illegally marketed the anti-psychotic drug Seroquel to children and elderly patients for uses not approved by the Food and Drug Administration." The AstraZeneca company, whose vaccines are now killing people with blood clots, was caught engaging in massive bribery and kickback schemes to reward doctors for prescribing its Seroquel drug for off-label use, which means the FDA had never approved the drug for those uses. As ABC News explained in 2010: The government claims that AstraZeneca intentionally marketed the drugs -- by paying kickbacks to doctors -- for a variety of illnesses for which it had never been tested, including aggression, Alzheimer's, anger management, anxiety, attention-deficit hyperactivity disorder, dementia, depression, mood disorder, post-traumatic stress disorder and sleeplessness. It was given to the elderly, children, veterans and inmates, who were treated as "guinea pigs," according to the acting U.S. attorney for the Eastern District of Pennsylvania. Like always happens, AstraZeneca paid a $520 million fine -- as a "cost of doing business" -- and continued its unethical practices and dangerous drug operations, leading us to 2021 when the company fudged testing results data and released a deadly vaccine that has already been suspended in at least 25 countries. This is business as usual in the pharma / vaccine industry, where it has always been about profits over people.

Nearly everyone taking covid vaccines does so out of stunning ignorance: Quite literally, every single person taking covid vaccines right now is doing so under a stunning degree of dangerous ignorance. In truth, most of them don't want to know about vaccines. They simply want to be told what to do, and they prefer to have blind faith in "authority" sources who are actually using vaccines to achieve global depopulation goals. Interestingly, even many highly intelligent people are still incredibly gullible when it comes to having blind faith in authority. Mainstream doctors and pharmacists are among the worst, blindly believing whatever the CDC and Big Pharma tells them. We wonder what will happen if tens of thousands of doctors and pharmacists die from the covid vaccine inflammatory reaction over the next 24 months or so... likely it will place even more strain on an already collapsing system of failed western medicine. And what will the doctors tells themselves as they are dying? Most likely they will claim unvaccinated people are to blame for their torturous demise. Because it couldn't possibly be that doctors made a mistake in believing false authority, could it?

Even people from the highest levels of Big Pharma are now warning humanity about the real agenda here. As LifeSiteNews reports, the former VP of Pfizer is now warning humanity against the evils of Big Pharma and its insane, criminal agenda to potentially exterminate humankind. From that article: (emphasis added) Dr. Michael Yeadon, a former Vice President and Chief Science Officer for Pfizer, spoke with great urgency to America’s Frontline Doctors (AFLDS) late last week warning that the drive to inject the largest possible portion of the population with experimental COVID-19 vaccines is “madness,” involves “evil,” includes “crimes against humanity” and may have the intention of “massive-scale depopulation.” Yeadon’s comments are also made in the broader context of a sharp debate over theories offered by Geert Vanden Bossche, a vaccine expert associated with the Bill & Melinda Gates Foundation, who, with the appearance of a “whistleblower” has also warned of a “global catastrophe without equal” due to the way these vaccines have been utilized. Last December, Yeadon, a British national, filed a petition with the European Medicines Agency (EMA) to immediately suspend testing on these experimental vaccines due to many safety concerns, including pathogenic priming, which involves “an exaggerated immune reaction, especially when the test person is confronted with the real, ‘wild’ virus after vaccination.” In their white paper on the topic, AFLDS warned that such reactions, which can be fatal, “are difficult to prove,” as they are often interpreted as infection with “a worse virus,” or, perhaps, a more dangerous variant. Having maintained that there is “no need of vaccines” for COVID-19, Yeadon emphasizes below, “PLEASE warn every person not to go near top up vaccines. There is absolutely no need to them.”

In World War II, globalists learned that exterminating populations by force is extremely difficult to pull off. Some people resist, and there were many whistleblowers inside the Nazi regime that actively worked against the aims of the Holocaust. But with the covid bioweapon and global vaccine rollout, globalists have perfected the mind control necessary to get people to line up and beg to be exterminated. Indeed, they are actually willing to pay for the very vaccines that are killing them! Globalists no longer need large extermination ovens, boxcar trains and armed soldiers to pull it off. They just need control over the media, Big Tech and NIH bioweapons funding channels. Anyone warning humanity about the global extermination is vilified and silenced, while all the voices promoting the vaccine kill shots are amplified and granted unlimited "credibility" to reel in more gullible suckers. Today's Situation Update podcast covers all these topics and much more, including a teaser about the topic of my upcoming live speech at the Tulsa event in April: Brighteon.com/202424f5-afd8-4132-acd2-890f9500f022 Find each day's new podcast at the Health Ranger Report channel on Brighteon.com: https://www.brighteon.com/channels/hrreport
Mastodon
Parler
Gab
Copy
Tagged Under:
vaccines genocide Big Pharma Holocaust Vaccine deaths vaccine injury biological warfare depopulation pandemic outbreak bioweapons extermination coronavirus vaccine wars COVID
You Might Also Like